The Parish Church of St Judas’s, with its unique corrugated-iron porch, is looked after by Dennis in his role as

Verger and has Miss Edwards as organist.  Dennis maintains the organ and spends services at work in his Pump Cupboard.  One feature of the church is the brass memorial to a medieval knight who is known as Sir Hugh de Wossname because his actual name has been worn away by the action of Brasso and duster; another fetaure is the font which is connected to some subterranean system whose gurgles foretell the weather.

Over the centuries there have been many vicars in  Grunty Fen, although few of them stayed very long, and at least one of them left the clergy altogether to become a tobacconist (see Who’s Who in Grunty Fen).

Dennis’s favourite vicar, The Rev Wingfield Digby, now deceased, was succeeded by The Rev Quentin Partridge who is known by Dennis as ‘Stoopid’.  He is seldom seen in the parish because his flock fray his nerves and he retreats to retreats.  He is terrified of the bishop and of his own wife who is an occult fortune teller and writer of the horoscopes in The Grunter.

In 2003 Grunty Fen was struck by a religious schism which left the parish ‘riven in twain’ according to Dennis. To find out more, listen to A Blessed Nuisance from the album Trouble Is.

The Feral Nuns are the Sisters of Perpetual Availability who, after being ejected from their convent for immorality, now roam the fen on Vespa scooters terrifying men and living off the land.

Adrian is Dennis’s Guardian Angel.  Adrian was a railway worker until he crossed the line one day to get a packet of fruit gums from the machine on the other platform and was hit by a passing express. Now he rides pillion on Dennis’s bike and offers advice.

There have been – and are still – many, many religious sects in Grunty Fen including The Jonahs, The Whiskers and The Total Adherents at Rat Dyke.  This is not an exhaustive list by any means; the village of Pious End is remarkable because it has more chapels, each of a different religious denomination, than it has inhabitants. 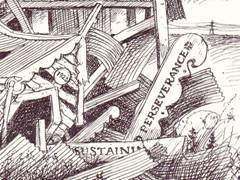 Monks’ Bushes is an area of dank scrub, named because medieval monks who upset the Abbott at Ely

were sent there apparently as a punishment but what they did in the bushes is not known. If you’d like to hear what Dennis and Mr South got up to in Monks’ Bushes, you need The Fen In Winter from the album Trouble Is.

The Book of Ezeriah is a theological tract pertaining to the spirituality of Grunty Fen. Click here to read more about this tract in a riposte written by the theological ripostor Christopher Stephens.