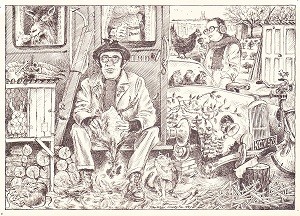 The LNER is the railway carriage inhabited by Dennis and his grandmother for as long as anyone can remember. It still stands on its original bogeys but on a plot of land rather than rails.

Accommodation includes the First Class, used as Gran’s bedroom, a smaller compartment for Dennis, the Parlour and the Scullery. The front door leads directly into the Parlour which is furnished with a sofa (behind which Gran accumulates

her growing collection of Royal Family magazines), a cooking range and a table covered in willow-pattern oil cloth on which stands the cruet containing a range of condiments including witchhazel, liniment and penetrating oil.

In the Parlour is the Mullard (or the Radiogram), bought by Dennis’s mother as a young woman. The disc hoppers are used to store coal and kindling. Gran still fiddles with the knobs, trying to find Dick Barton, Special Agent.

Dennis warms up on cold mornings by pedalling through the William Tell Overture on the Pianola; occasionally Gran asks him to pedal Danse Macabre.

There is also the Chiffonier, about which Mr South says:

‘I never cease to marvel at the sheer variety and quantity of items stored in that single drawer of the small sideboard standing in one corner of the LNER Parlour: everything from the bookmark Gran carried in her prayer book the day she was married more than 70 years ago to the throttle linkage trunnion grommets from a 1957 Caterpillar tractor.’

The back door of the LNER leads into the Scullery through the Wardrobe Porch, converted from an item of bedroom furniture and containing Dennis’s startling collection of Rude Roots – mainly carrots, parsnips and potatoes depicting various aspects of the human body.

The Meat Safe hangs in the Wardrobe Porch. Made of perforated zinc, it serves as a fridge and means Dennis and Gran will never starve because there is always something in it even in the hardest times – usually half a dish of macaroni cheese and a few slices of the ’43 Spam. Another reliable source of support in any emergency is the lining of Dennis’s mac, which contains string, tools, Zubes, toffees, etc.

The Beehive stands in Dennis’s bedroom and is used for his dirty clothes. When he runs short of socks or shirts he pulls old ones out through the bees’ popping hole at the bottom of the hive. As a boy, Dennis bought a Folding Canoe from an advertisement in Exchange and Mart. The canoe is now stored in his wardrobe; he’s still trying to unfold it.

He also owns a Universal Shovel, also bought from Exchange and Mart, which has a folding blade and a hollow handle containing every possible tool anyone could ever want in an emergency. It is, however, impossible to get them all back once the handle has been emptied, as Mr South found out to his cost in The Universal Shovel from the album Archive Editions 3. There’s more information on the history of the Universal Shovel in the book Who’s Who in Grunty Fen.

Other items in the LNER include The Dresden Shepherdess with the Bad Cold, a china figurine with a broken nose replaced upside down by Dennis using rather a lot of Seccotine, and The Peek Frean, which is a biscuit tin closely guarded by Gran, containing family documents Dennis has never been allowed to see. 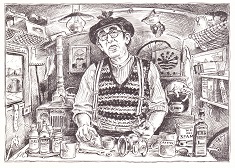 The plot of land under the LNER is gradually expanding as Dennis moves the fences a few inches every year; the fences are made of old hospital beds which rattle in the wind because the legs are full of pills hidden there by patients long ago.  These fences are now quite rare because most of them were used to fund the Dockerill pharmaceutical empire (see Who’s Who in Grunty Fen).

The LNER faces The Great Puddle which inexplicably is deeper at the edges than in the middle, and surrounding the LNER are a great many sheds devoted to different uses. The most important is The Miscellaneous Shed containing most of Dennis’s most valuable possessions, including a large number of old sofas. When short of money he goes sofa mining into the upholstery and sometimes finds a zloty.

Dennis keeps The Warm Bucket  in the Miscellaneous Shed.
Left to him by his grandfather, the bucket contains an unidentified glutinous substance which remains warm in the coldest weather.  Dennis believes that one day he will harness its power and become rich.

Other sheds include The Mustard and Cress Shed, The Bicycle Shed (containing bicycles whole and in part), The Mangle (or Laundry) Shed and The Ark Shed, which is designed to float when necessary – particularly useful if there’s an unusually rainy summer or an overflow problem with The Bathroom Shed.

The Office Shed houses a collection of typewriters, all of which have mechanical faults but which when used together can achieve a perfect text. Dennis uses the punctuation typewriter first and then fills in the words on the other machines.

Among the sheds stands The Hen Coop Car – the hulk of a Wolseley saloon car formerly owned by the Metropolitan Police but now home to a flock of hens known as the Flying Squad.

Beyond the boundaries of this outpost of shacks and sheds is a vast sweep of flat fenland broken only by looping lines of pylons going off into the misty distance. Dennis has always been fascinated by pylons, to the extent that he wrote a song about them. It’s called – strangely enough – Pylons and it’s on the album The Bomb Photo. When Dennis was a little boy he used to kick the pylons to make the lights blink in Piccadilly.