This section comprises Animals Past, Present, Owned, Shared or Feral.

The Cat lives in the LNER. Gran has stuffed a cushion with the lumps of matted fur she plucks from the cat when it sits on her lap.   Not to be confused with Mudmogs which are a species of fen cats bred by the Woollard brothers in their sloping house.  A Mudmog’s back legs are longer than its front legs, which is possibly a result of being bred in a sloping house. However, this makes them extremely nimble in muddy conditions. 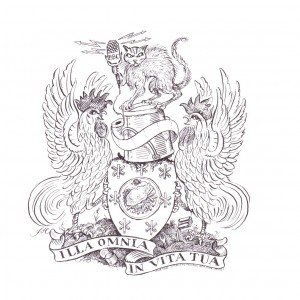 The Padney Pikey is a bantam cock owned by Dennis which conceals its position by going cock-a in one location and then doodle-do in another. Padney Pikeys feature prominently on The Arms of the Wireless at Grunty Fen (left). See Radio GF1 for an explanation of the Arms.

Elsan is a huge, shaggy, filthy, evil-smelling dog which belongs to George Robinson but he escapes to the LNER when his master is drunk. He is named after a chemical closet.

Brian the Guard Duck lives on the Great Puddle beside the LNER, and Dodger is the long-deceased dog owned by Dennis as a boy and now buried in the bushes behind the LNER under a slab of anthracite coal bearing a fossilised fern.

The Goldfish lives in a bowl on the pianola in the LNER and likes Mackeson in its water. Always feels it’s being watched. Which it is. By the cat.

Bomber Harris is a sparrow living in the church. You can hear about his exploits in A Blessed Nuisance on Trouble Is.

Coypu were far more numerous in Grunty Fen before the Second World War, but now survive in one known colony between the Mere and the Tip. The decline of the coypu is directly attributable to Buzz, Dennis’s stepfather. Being from North America, he used to call the coypu ‘nutria’, which inhabitants of Grunty Fen took to mean that they had health-giving properties when eaten.

Cherie is a vicious Chihuahua owned by Mrs Jeffrey.

The Parrot helps GP Doc Wallace with diagnoses. Main medical phrases are: ‘That’s a biggun!’ and ‘It’s me nerves’.

Rats are prevalent throughout.